While the number of people with Alzheimer’s continues to climb, there have been no medical breakthroughs to slow the progress of this devastating disease. But there is reason for hope. Recent scientific discoveries have led to a new understanding of the cause of Alzheimer’s disease that could revolutionize the way that it is treated. 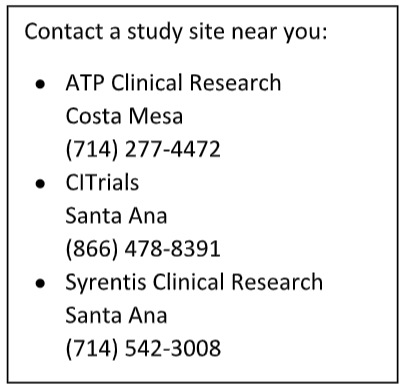 I am the Chief Medical Officer for Cortexyme, a company that is sponsoring an international clinical trial for an experimental drug based on a new theory of Alzheimer’s. This study, called GAIN, is recruiting participants at three sites in Orange County and other centers across the country. GAIN is based on a completely new understanding of Alzheimer’s disease and potential treatment approach, which I explain in this blog. Please read more and feel free to call a study site or visit our website at www.GainTrial.com if you or someone you love is interested in participating.

Bacteria May Cause Alzheimer’s

Scientific experts have discovered that bacteria called P. gingivalis, most commonly associated with degenerative gum disease, can infect the brain in older people, who are more susceptible to infection. Once in the brain, these bacteria have been shown to destroy neurons (brain cells) and cause other signature signs of Alzheimer’s disease. When the brain becomes infected, the brain’s natural defenses gather around the infected cells causing the inflammation and buildup of plaques associated with Alzheimer’s disease.

Cortexyme is developing therapies based on this new understanding of P. gingivalis infection as a potential cause of Alzheimer’s disease. We have developed an experimental drug called COR388 that is designed to stop the bacteria from further damaging healthy brain cells.

Click the image to watch a video that explains how this may work.

In a study of mice infected with the P. gingivalis bacteria, COR388 reduced the infection, blocked the production of toxins in the brain, reduced inflammation and halted damage to neurons. You can read the scientific journal article about this study published in January 2019 here.

Our company previously conducted a clinical study administering our drug COR388 or placebo for 10 days to 24 healthy older volunteers, and for 28 days to nine patients with Alzheimer’s disease. COR388 was well-tolerated with no concerning adverse events. In addition, there was a promising trend of average memory test improvement for the Alzheimer’s patients in the study who were administered COR388 compared to placebo.  There were also signs in blood tests that COR388 reduced the inflammation and damage to key proteins in the brain.

Based on the promising early research, Cortexyme is conducting an international clinical study called the GAIN Trial.  This clinical trial will evaluate whether our drug is safe and can slow or halt the progression of Alzheimer’s disease.

The GAIN Trial is being conducted at about 90 clinical research centers in the US and Europe enrolling more than 500 participants with mild to moderate Alzheimer’s disease.

There are three sites that are currently recruiting patients in Orange County:

Consider Participating in the GAIN Trial

We are working hard to find approaches for slowing the progression of Alzheimer’s disease. Advances in treatment are only possible through clinical trials like GAIN.  Clinical trials explore whether investigational drugs are safe and effective for humans, following strict requirements to protect patients and help produce reliable results.

I invite you to learn more about the study and see if you or a loved one may be eligible. The Orange County study sites are recruiting people who:

Study participation, testing and medication are free to all participants. Some people may receive stipends to cover cost of meals and travel associated with clinic visits.

Subjects enrolled in the GAIN Trial will be randomly assigned to one of three groups:

In order to objectively and scientifically assess the effects of the drug, neither the participants nor the study doctor will know during the study what group each patient is in.

Interested patients will need to go through a screening process to ensure they are appropriate candidates. Participation will last about one year, with scheduled visits to the clinic for assessments about every four to twelve weeks until the 48-week treatment period is complete. Clinic visits will include memory and psychological assessments as well as physical exams and safety tests.

You can learn more about the GAIN trial and contact the study sites in Orange County and across the country by visiting www.GainTrial.com.

Cortexyme, based in South San Francisco, is a biopharmaceutical company pioneering a novel disease-modifying therapeutic approach to treat a key underlying cause of Alzheimer’s disease and other degenerative diseases.  To learn more about us, you can visit www.cortexyme.com.