What is Alzheimer’s Disease?

What is Alzheimer’s Disease?

Alzheimer’s disease is an irreversible, progressive brain disorder that slowly destroys memory and thinking skills, and eventually the ability to carry out the simplest tasks. In most people with Alzheimer’s, symptoms first appear in their mid-60s. Estimates vary, but experts suggest that more than 5 million Americans may have Alzheimer’s.

Changes in the Brain

Scientists continue to unravel the complex brain changes involved in the onset and progression of Alzheimer’s disease. It seems likely that damage to the brain starts a decade or more before memory and other cognitive problems appear. During this preclinical stage of Alzheimer’s disease, people seem to be symptom-free, but toxic changes are taking place in the brain. Abnormal deposits of proteins form amyloid plaques and tau tangles throughout the brain, and once-healthy neurons stop functioning, lose connections with other neurons, and die.

The damage initially appears to take place in the hippocampus, the part of the brain essential in forming memories. As more neurons die, additional parts of the brain are affected, and they begin to shrink. By the final stage of Alzheimer’s, damage is widespread, and brain tissue has shrunk significantly. 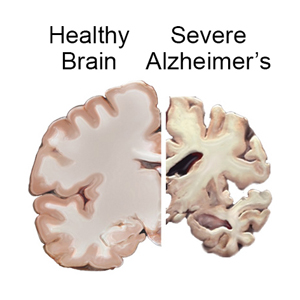 What is the difference between Alzheimer’s & Dementia?

Alzheimer’s disease and dementia are often used interchangeably as many people believe that one means the other. In fact, the distinction between the two diseases often causes confusion on the behalf of patients, families and caregivers. Discover how the two diagnoses, while related, are remarkably different.

Dementia is an umbrella term for a set of symptoms including impaired thinking and memory. It is a term that is often associated with the cognitive decline of aging. However, issues other than Alzheimer’s can cause dementia. Other common causes of dementia are Huntington’s Disease, Parkinson’s Disease and Creutzfeldt-Jakob disease.

When a person is diagnosed with dementia, they are being diagnosed with a set of symptoms. This is similar to someone who has a sore throat. Their throat is sore but it is not known what is causing that particular symptom. It could be allergies, strep throat, or a common cold. Similarly, when someone has dementia they are experiencing symptoms without being told what is causing those symptoms.

Another major difference between the two is that Alzheimer’s is not a reversible disease. It is degenerative and incurable at this time. Some forms of dementia, such as a drug interaction or a vitamin deficiency, are actually reversible or temporary.

Once a cause of dementia is found appropriate treatment and counseling can begin. Until a proper diagnosis is made, the best approach to any dementia is engagement, communication and loving care.

Scientists don’t yet fully understand what causes Alzheimer’s disease in most people. In people with early-onset Alzheimer’s, a genetic mutation is usually the cause. Late-onset Alzheimer’s arises from a complex series of brain changes that occur over decades. The causes probably include a combination of genetic, environmental, and lifestyle factors. The importance of any one of these factors in increasing or decreasing the risk of developing Alzheimer’s may differ from person to person.

The Basics of Alzheimer’s

Scientists are conducting studies to learn more about plaques, tangles, and other biological features of Alzheimer’s disease. Advances in brain imaging techniques allow researchers to see the development and spread of abnormal amyloid and tau proteins in the living brain, as well as changes in brain structure and function. Scientists are also exploring the very earliest steps in the disease process by studying changes in the brain and body fluids that can be detected years before Alzheimer’s symptoms appear. Findings from these studies will help in understanding the causes of Alzheimer’s and make diagnosis easier.

One of the great mysteries of Alzheimer’s disease is why it largely strikes older adults. Research on normal brain aging is shedding light on this question. For example, scientists are learning how age-related changes in the brain may harm neurons and contribute to Alzheimer’s damage. These age-related changes include atrophy (shrinking) of certain parts of the brain, inflammation, production of unstable molecules called free radicals, and mitochondrial dysfunction (a breakdown of energy production within a cell).

Most people with Alzheimer’s have the late-onset form of the disease, in which symptoms become apparent in their mid-60s. The apolipoprotein E (APOE) gene is involved in late-onset Alzheimer’s. This gene has several forms. One of them, APOE ε4, increases a person’s risk of developing the disease and is also associated with an earlier age of disease onset. However, carrying the APOE ε4 form of the gene does not mean that a person will definitely develop Alzheimer’s disease, and some people with no APOE ε4 may also develop the disease.

Also, scientists have identified a number of regions of interest in the genome (an organism’s complete set of DNA) that may increase a person’s risk for late-onset Alzheimer’s to varying degrees.

Early-onset Alzheimer’s occurs in people age 30 to 60 and represents less than 5 percent of all people with Alzheimer’s. Most cases are caused by an inherited change in one of three genes, resulting in a type known as early-onset familial Alzheimer’s disease, or FAD. For others, the disease appears to develop without any specific, known cause, much as it does for people with late-onset disease.

Research suggests that a host of factors beyond genetics may play a role in the development and course of Alzheimer’s disease. There is a great deal of interest, for example, in the relationship between cognitive decline and vascular conditions such as heart disease, stroke, and high blood pressure, as well as metabolic conditions such as diabetes and obesity. Ongoing research will help us understand whether and how reducing risk factors for these conditions may also reduce the risk of Alzheimer’s.

A nutritious diet, physical activity, social engagement, and mentally stimulating pursuits have all been associated with helping people stay healthy as they age. These factors might also help reduce the risk of cognitive decline and Alzheimer’s disease. Clinical trials are testing some of these possibilities.

Concerned about memory loss or other symptoms? Call us and let us answer your questions 844.435.7259

* Information from the NIH